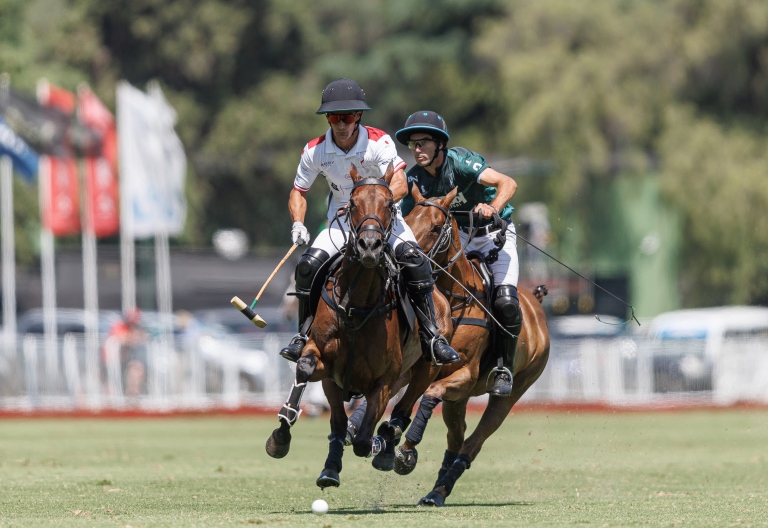 On Friday 11/25, date 9 (last of Zone A) of the 129th HSBC Argentine Polo Open began. On field 2, La Hache Perpool, a team from the qualifiers, achieved its first win in the tournament after defeating La Irenita Gsquared by 13-11. In addition to winning the Copa Río Uruguay Seguros that was at stake, it achieved 300 units for the 2022 Ranking, facing the 2023 Triple Crown. Meanwhile, the third team of the Mac Donough organization ended the season without units and was eliminated from next season's TC.

Great game from La Hache, who controlled the game times from the beginning, took a great advantage in the first half and achieved a key victory for his future aspirations. With this victory, at least he made sure to play the Repechage against the winner of the Chamber of Deputies Cup to try to get his place in the Triple Crown 2023. On the other hand, La Irenita G2 did not achieve the objective and said goodbye to the tournament with four defeats in same number of presentations.

Then, from 5:00 p.m. on court 1, a great “semifinal” will be played between two teams that are undefeated in the tournament: La Natividad , defending champion of the contest, which will have the return of the South African Ignatius du Plessis, vs. The Irenita Grand Champions. Whoever wins will not only be left with the pass to the grand final of the tournament, but also with the Volkswagen Cup.

The teams and progression:

The teams for the second match of the day:

All matches are broadcast live on Star+ (Argentina and Latin America) and via streaming on https://live.aapolo.com/ Subscribe!

On Friday 25, starting at 6:00 p.m., the polo festivities continue. In addition to the best gastronomy, you will be able to enjoy the Tommy Muñoz set ; and the recitals by Migrantes and Juan Ingaramo . Don't miss them!

Buy your tickets for the after at https://www.ticketek.com.ar/after-polo/campo-argentino-de-polo

On Sunday 27, for Zone B they will play at 2:00 p.m. on field 2, La Irenita Clinova vs. La Esquina, a group from the classification and that must win if it wants to have a place in the Triple Crown 2023 – it has not yet added points in the Ranking. In this match the Trapiche Cup will be at stake.

At 4:30 p.m., on field 1, a new edition of the Argentine polo superclassic will be played: La Dolfina Saudi, undefeated in the tournament and with the return of Uruguayan Pelón Stirling, vs. , Ellerstina Turismo Felgueres , a team forced to win by 3 goals ahead and converting 8 goals or more to achieve their goal. The winner of the match will take the Imperial Cup.

Get your tickets at https://www.ticketek.com.ar/triple-corona-2022/campo-argentino-de-polo

The formations that are free on these dates: